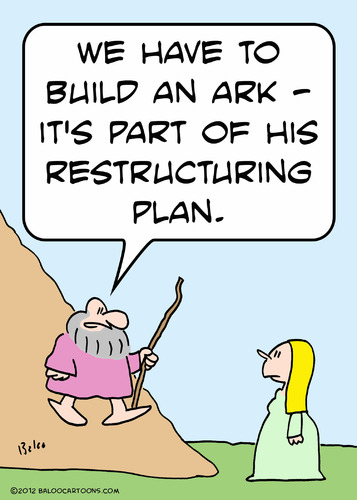 Recently I have heard of so many people losing their jobs because of a company restructure.   Being called in and told that the company is going through changes and one of those is that your job is now redundant.  Surprise!!   Maybe not.   Perhaps you have seen this coming.  Other people in other departments have gone.  The company is now a third of the size it was two years ago.  Secret meetings appear to be happening all around you and that smarmy new guy that arrived 3 months ago is looking even smarmier.
It doesn’t seem to make sense though – everyone left is working twice as hard these days, having taken on the work of all those that are now just history.   There is clearly  still work to be done so it comes as just a little bit of a shock (even though its happened around you before) to be called into that dreaded meeting.
You sit there feeling shocked and helpless.   Did you manage to get your words out and tell them what you were thinking.  Probably not!  In the face of these kinds of situations people are generally thrown off balance.  Its not until afterwards that you can come up with all the things that you would have liked to have said in that room.
Apparently there are other jobs you can apply for but when you look at the job spec they appear to be very familiar.  In fact so familiar that it is actually your job.   At this point you may be panicking and really unsure of how to play this.
Its beginning to look like a plan that is already in place.  You’re out, your history and there’s not a lot you can do about it.
At this point you may either be feeling helpless or angry or probably both.  But once the initial shock has work off think about whether you are helpless or powerful.
Are you helpless.  The definition of helpless is:

Unable to help oneself; powerless or incompetent.
Lacking support or protection:
Impossible to control; involuntary

So, you’ve decided you are in fact competent and able to help yourself and now there are things you can do.
Procedures need to be followed around redundancy and there is information out there for you.  https://www.gov.uk/redundant-your-rights/overview.  Find out what your legal rights are.
Talk to your family and get ideas from others that have been through similar circumstances.  Get as much support as you can.

If you feel upset then that’s understandable – it is very upsetting to be told that your job is redundant and even more so when you know its not true.

And now turning to the anger you feel.  Anger is a normal reaction to this kind of situation.  Make sure you use the energy of your anger in your favour by ensuring that you do everything possible to stay in control of this situation.   Some ideas:

– Write things down
– Make lists of any relevant situations that might help your case such as examples of unfairness or discrimination in the office
– Get informed – legal advice – trade union support etc.
– Plan what you want to say in the meetings
– Try and stay calm before you go into the meetings by taking long deep breaths
– Take a friend or colleague in with you – someone you can trust.

Once this ordeal is over, and it will end you may come to realise that actually you didn’t like it there anyway.  Perhaps this wasn’t the job that you’d always dreamed of.  Maybe this will give you an opportunity to make a real change in your life.

All transitions are difficult times because you are between security.  Having a job is secure.  No job is insecure.  The next job or career move will give you back that security.

Affirmation:  I am strong, I can fight my battles and I will grow from this experience

More from my site

The Mood Cards Box 2 are available on Amazon:

Find The Mood Book on Amazon:

Find The Mood Diary on Amazon:

This website uses cookies to improve your experience while you navigate through the website. Out of these, the cookies that are categorized as necessary are stored on your browser as they are essential for the working of basic functionalities of the website. We also use third-party cookies that help us analyze and understand how you use this website. These cookies will be stored in your browser only with your consent. You also have the option to opt-out of these cookies. But opting out of some of these cookies may affect your browsing experience.
Necessary Always Enabled

Any cookies that may not be particularly necessary for the website to function and is used specifically to collect user personal data via analytics, ads, other embedded contents are termed as non-necessary cookies. It is mandatory to procure user consent prior to running these cookies on your website.