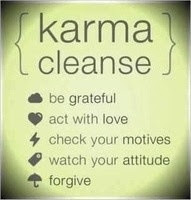 I often hear the people using the word karma when someone or something bad has happened to them or in society.   It is thought of as a punishment to come for those that deserve it and it is sometimes easier to think that karma will get that person rather than us having to take some action to communicate the problem.  The problem with this is that if we are imaging all the bad things that will happen because of karma what we are in fact doing is creating our own bad karma.

On a society level we might think that nations deserve to have bad karma for their treatment of others.   We imagine them falling from their great heights or suffering the same fate as they have metered out.  The same rule applies when we imagine bad things occurring to them.
How and why you may ask.  Its not me that did something wrong.
Karma is not ours to meter out in thought or action.  It is based on a principal that individual behaviour will mirror universal patterns. The tiniest act, a thought for example, can have an enormous impact……the ripple effect…… The energies of all our thoughts and actions have the potential for change above and beyond ourselves and our own lives.
On an individual level we are responsible for our own karma  what comes back to us depends on our own thoughts and actions.   When we take a positive approach to life, acting with good intention, not holding onto negativity or resentments but moving into forgiveness and acceptance we are offering ourselves an opportunity to create our own good karma.
If we believe we have acted wrongly or badly then its never too late to change our karma.  Because karma means action and not in-action we can always move to reflect how we want our world to be.  By greater self-understanding of cause and effect we can adjust our actions accordingly to unlock patterns and create a better path for ourselves.
It is also my belief that we are all also responsible and accountable for our actions on a spiritual level.  On a more global level what we do, say and think will create a result out there in the universe. That result is karma. For example living in a divided world where one group of people manipulates for financial gains or believe themselves to be superior to others will have a negative effect and actions that follow may be attributed to the karma of all concerned.  But remember there are always two sides to every story and rather than attributing blame or inciting hatred we can instead sent out love and healing energy to all involved.
We are living in difficult times and because our thoughts and actions have energy it is important to put out positivity for the global good
Have a great day:-)

More from my site

Find The Mood Diary on Amazon:

Find The Mood Book on Amazon:

You can buy The Mood Cards BOX ONE directly from Andrea for £14.99, which includes free postage and packaging within the UK.

For postage to other areas please CONTACT Andrea direct to request postage rates.

The Mood Cards are also available on Amazon:

The Mood Cards Box 2 are available on Amazon: